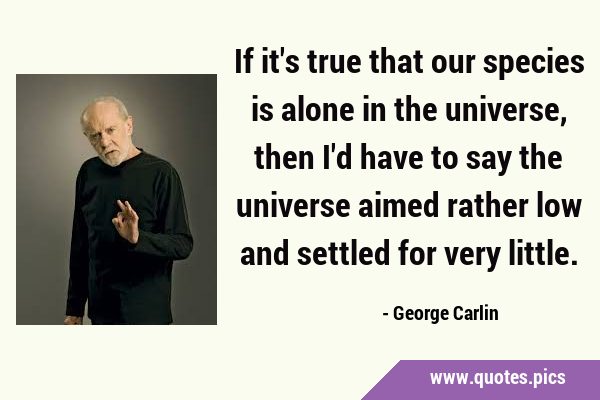 “ If it's true that our species is alone in the universe, then I'd have to say the universe aimed rather low and settled for very little. ”

There is more stupidity than hydrogen in the universe, and it has a longer shelf life.

Sun came up on time today morning. None of the planets in this solar system collided today. In the whole universe no accidents, in this endless cosmos no accidents, everything going great but you have one nasty little thought crawling in your head and it's a bad day, you've completely lost perception with life

If it turns out that there is a God...the worst that you can say about him is that basically he's an underachiever.

The cosmos is within us. We are made of star-stuff. We are a way for the universe to know itself.

The story so far: In the beginning the Universe was created. This has made a lot of people very angry and been widely regarded as a bad move.

It's funny how humans can wrap their mind around things and fit them into their version of reality.