Warning: Undefined array key "pt" in /home/chilokac/public_html/quotes.pics/core/quote.php on line 483
 All earnest students should keep a record, or at least a mental diary, of their changing tendencies, marking out their progress in the development of
⋮ Random WittyFearCourageFreedomSuccessHopeGodSpiritualityReligionHappinessPhilosophyRelationshipPeaceFailure
HumorHeartChangeFriendshipForgivenessLeadershipKindnessWomenDeathAdviceArtBeautyBeliefChoiceDesireDreamsEducationExperienceFaithFamilyFeelingHistoryKnowledgeMarriage
GodSpiritualityReligionHappinessPhilosophyRelationshipPeaceFailureMindNatureOptimismPainPatiencePerspectiveRealityRomanticShortSoulStrengthSufferingThoughtWar 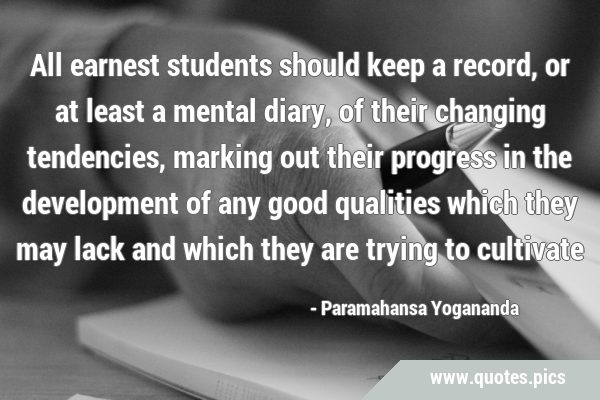 “ All earnest students should keep a record, or at least a mental diary, of their changing tendencies, marking out their progress in the development of any good qualities which they may lack and which they are trying to cultivate ”

The ideas of heat & cold, pleasure & pain, are produced by the contact of the senses with their objects. Such ideas are limited by a beginning & an end, they are transitory, bear them with patience

yoga as a process, yoga as a method, yoga as a technology, yoga as a science is essentially to break the limitations of a certain concretization that happens, which we call as personality - to evolve from being a person to a presence.

Surrendering to the demands of the senses does not satisfy them, but rather creates insatiable desires for further sense experiences.

This show has a purpose: that you learn how to play the various parts of the life movie without identifying your Self with your role

The ocean cannot be received in a cup unless the cup is made as large as the ocean. Likewise, the cup of human concentration and human faculties must be enlarged in order to comprehend God

My religion consists of a humble admiration of the illimitable superior spirit who reveals himself in the slight details we are able to perceive with our frail and feeble mind.