Warning: Undefined array key "pt" in /home/chilokac/public_html/quotes.pics/core/quote.php on line 483
 If the process of dividing life into proper compartments doesn't mean much to you anymore, you want to know the timelessness of life, the boundless na
⋮ Random WittyFearCourageFreedomSuccessHopeGodSpiritualityReligionHappinessPhilosophyRelationshipPeaceFailure
HumorHeartChangeFriendshipForgivenessLeadershipKindnessWomenDeathAdviceArtBeautyBeliefChoiceDesireDreamsEducationExperienceFaithFamilyFeelingHistoryKnowledgeMarriage
GodSpiritualityReligionHappinessPhilosophyRelationshipPeaceFailureMindNatureOptimismPainPatiencePerspectiveRealityRomanticShortSoulStrengthSufferingThoughtWar 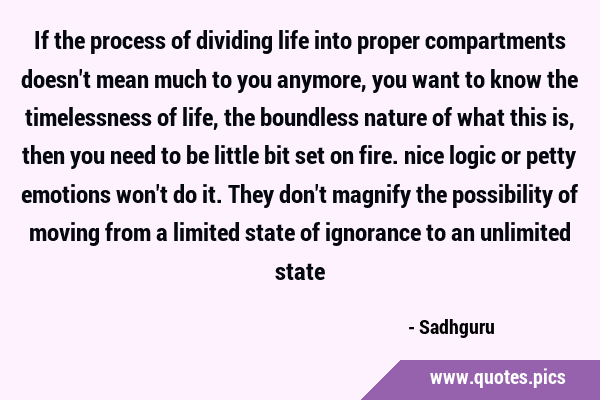 “ If the process of dividing life into proper compartments doesn't mean much to you anymore, you want to know the timelessness of life, the boundless nature of what this is, then you need to be little bit set on fire. nice logic or petty emotions won't do it. They don't magnify the possibility of moving from a limited state of ignorance to an unlimited state ”

yoga as a process, yoga as a method, yoga as a technology, yoga as a science is essentially to break the limitations of a certain concretization that happens, which we call as personality - to evolve from being a person to a presence.

Prayer means you are trying to tell God what to do. Meditation means you understand your limitations and shut up

Once you have come as a human, you are not trapped anymore, other creatures are trapped in their own instincts, beyond that they cannot think, you have instincts for survival, but you have the possibility of going beyond instincts