Warning: Undefined array key "pt" in /home/chilokac/public_html/quotes.pics/core/quote.php on line 483
 When everybody's striving to live joyfully, if you are walking on the street infecting people with misery with a miserable face it must be on the pena
⋮ Random WittyFearCourageFreedomSuccessHopeGodSpiritualityReligionHappinessPhilosophyRelationshipPeaceFailure
HumorHeartChangeFriendshipForgivenessLeadershipKindnessWomenDeathAdviceArtBeautyBeliefChoiceDesireDreamsEducationExperienceFaithFamilyFeelingHistoryKnowledgeMarriage
GodSpiritualityReligionHappinessPhilosophyRelationshipPeaceFailureMindNatureOptimismPainPatiencePerspectiveRealityRomanticShortSoulStrengthSufferingThoughtWar 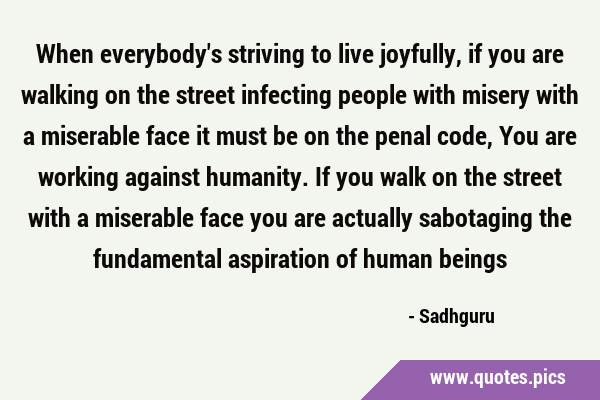 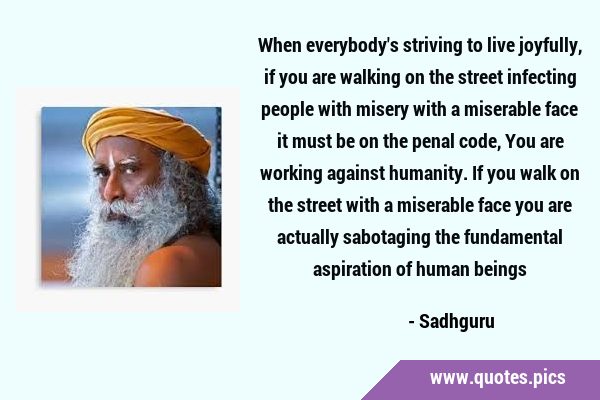 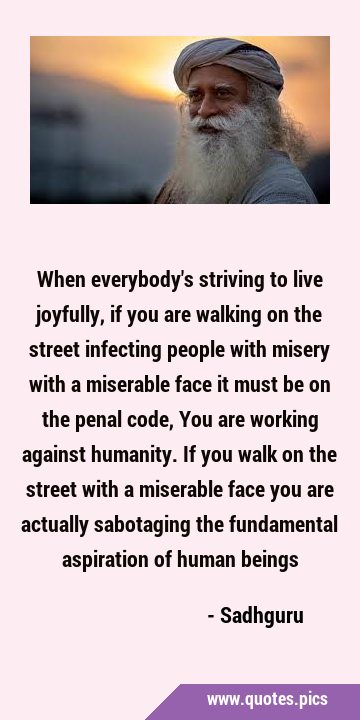 if you are going to make people around you joyful and relieved only when you die, that's not a good way to live.

More conflict is happening within the four walls of the homes than is happening anywhere on the planet. Only thing is bombs are not exploding so you don't hear it. They may be giving each other silent treatment.

[About Religious Clashes] Religion should have made people Divine, but it is not even making them human.

Ten years ago if somebody was walking on the street talking you would know that he's lost it, but today you don't know. Whether they got their head phones on or they just lost it and they're talking, we cannot make out

So morality is just that, it's the first step towards insanity. You just have to stretch it; if you stretch it, you will go there (insanity)